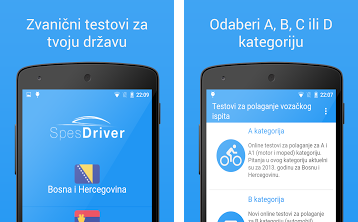 SpesDriver, mobile and web application, is the online learning platform for drivers.

It provides interactive driving licence tests, furthermore since the second version it also allows students to find a driving school in a city. Started as a high school graduation project, it became the biggest online learning platform for drivers in the country and the region with more than twenty thousand users per month (according to Google Analytics).

I have been working on the project as a full-stack web developer with a great passion for making future students passing a driving licence test as easy as possible. The backend is developed in PHP5 using Yii2 framework. The interactive test application is designed to be easily transformable to mobile Cordova application. The frontend is based on Angular 1.x and Angular Material. The project uses concepts like REST, MVC, ORM and I18N.